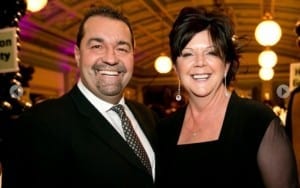 Cody and Jackie Jadresko attended the Miracle on the Mountain Gala event which was held at Bear Mountain in Victoria BC.

Cody was proud to donate $50,000 to the Victoria Hospitals Foundation  on behalf of Woodsmere Holdings Corp.

Sandy Jadresko of Woodsmere Holdings Corp. took a tour of the Victoria Sexual Assault Centre. On behalf of Woodsmere, Sandy donated $5000 to this outstanding program.

The Victoria Sexual Assault Clinic, the first and only one of its kind in British Columbia, provides an innovative and collaborative model of service delivery for recent survivors of sexual assault.

Our Place Society hosted its 5th anniversary Hungry Hearts dinner to help homelessness. Sandy and Danny Jadresko were delighted to attend and contribute. Woodsmere Holdings Corporation are pleased to announce that they made a substantial contribution to support Our Place Society.

On Valentine’s Day, 2015, the unveiling of the Danny & Sandy Jadresko Education Room took place in Victoria BC at the BC Cancer Hospital.

See the Invite for the event (PDF)

Kicking off the holiday season of giving, Danny and Sandy Jadresko of Woodmere Holdings Corp. made a $150,000 gift in the Jingle Mingle live auction, initiating a wave of support totalling over $600,000.

See the Times Colonist article – Around Town: A mingle for a very good cause

Danny and Sandy Jadresko have spent many memorable Valentine’s Days together over their 26 years of marriage, and this year they are celebrating with an extra special gift—rather than to each other—to the BC Cancer Foundation. The Jadresko’s, owner-operators of Woodmere Holdings Corp., chose to make a $100,000 donation to establish The Danny and Sandy Jadresko Cancer Research Fund with the BC Cancer Foundation.

BC Heart and Stroke Foundation